Movie: Rocketman (2019). About 46 min. when Elton (23) first comes to US to play at the Troubadour in LA. Bernie says he likes the Hat hanging by the bar and the owner says, “I won that hat in a bet with Bob Dylan.”  And a Dylan Digs Elton newspaper headline flashes.

TV Show: The Tonight Show with Jimmy Fallon. Elle Fanning interview. She has Bob Dylan’s harmonica (4.27min). She got her love of Bob Dylan from Cameron Crow, during the filming of We Bought A Zoo (2011–soundtrack includes Buckets of Rain). He would play Dylan all the time when she was 13 and she became obsessed. One of the producers of the movie Low Down (2014) gave it to her after filming. The harmonica is from his 2012 tour.

Movie: Goldfinch (2019). Plays cover of It’s All Over Now, Baby Blue by the group Them, while Theo is packing his bags getting ready to leave Vegas for New York after his father’s death.

Movie: Zombieland: Double Tap (2019). Driving in the car Berkeley is singing Like A Rolling Stone. At Babylon in the drum circle. Madison says to Berkeley you’re not a songwriter your a transcriber. “Even a fucking 12 year old knows who Bob Dylan is.” About an hour and half in.

Movie: Bohemian Rhapsody (2018). Near the end their manager is talking them into playing Live Aid with … and Bob Dylan!

TV Show: Watch What Happens Live with Andy Cohen interview with Huey Lewis fanned out on Bob Dylan during We Are The World recording. Also, they play a game: What’s the correct lyrics to the song…use Blowin’ in the Wind.

He talks about how bad Bob Dylan is now! “Bob Dylan if you go see him now is not that great!” “He looks like an old Egyptian woman.” Desus and Mero explaining Dylan to the crowd, “He was the Justin Bieber of his day.” Mulaney: “The Chicago Bulls were Bob Dylan in their day but now they suck.” He is wearing a Swimming to Cambodia button, which I am curious about.

No, the best among us who inspire us to find the best in ourselves. They unite us. When we look to our heroes, we agree, and that matters. Neil Armstrong, Sally Ride, Dolores Huerta, Venus and Serena and Selena, Bob Dylan, Scorsese, Fred Rogers, Harriet Tubman. — Renee

TV Show, Article: in Ringer. Pure Magic: The Oral History of Prince’s Super Bowl XLI Halftime Show. Only three mentions of Prince’s cover of All Along the Watchtower.

Morris Hayes (Prince musical director, keyboardist): He said he wanted to do the greatest Super Bowl show ever done. He just said, “We really want to think about what we do and not be like everybody else.” We kind of sat in the studio and talked it out. He’s like, “I like this Foo Fighters song.” And “All Along the Watchtower.” He just started thinking about the show and piecing it together in his head.

Shelby J. (vocalist): When we started looking at the songs on the set list, I was seeing like, “Best of You” and “Watchtower.” This dude is planning a show. And the way his mind works—it’s hard for me to speak of him in past tense—is to want it to be about the music and not do what everybody’s expecting, like come out and play “Raspberry Beret” and “Little Red Corvette” and then go into “Kiss.” He was paying homage to Ike and Tina Turner with “Proud Mary.” And Queen! And then he mixed his music into that. It’s like, “No it’s not about me. It’s about the music, it’s about this moment.”

Charles Coplin (executive producer): So we were just sitting there holding these tissues listening to this music at high volume, trying to evaluate whether these were the right songs. And as we listened, “Proud Mary” and “Best of You” came on, which was really like, “Whoa.” And “All Along the Watchtower.” And then it went into that reworking of “Purple Rain.” It was just really, really beautiful and overwhelming and surreal.

Movie: Selma plays Odetta’s cover of Dylan’s Masters of War at the start of the last hour.

Picture of Bob in an episode of Mom on CBS.

New Yorker review of the film Stockholm, by Anthony Lane

“We learn, as the movie begins, that it is “based on an absurd but true story,” and Budreau keeps the bones of that story intact, although he fools around with the flesh—reducing the number of hostages, and stuffing the film with as much Bob Dylan as possible. At one point, a policeman enters the bank and gets shot in the hand by Kaj, who sits him down and orders him to sing along to Dylan’s “Tonight I’ll Be Staying Here with You” on the radio. “What kind of cop doesn’t like Dylan? What kind of person doesn’t like Dylan?” Kaj asks. In real life, although a cop was indeed compelled to sing, he was allowed to pick his own tune. He chose Elvis’s “Lonesome Cowboy.” Talk about absurd.”

Daniel Salazar gets records of “Chuck Berry, John Lee Hooker and the Traveling Wilburys” and more. Wanted Charlie to listen to them. Grace picks up guitar and starts singing End of the Line. Salazar and Grace do an acoustic version of the song.

Podcast: Pod Dylan just last week reviewed a song from the Traveling Wilburys and referred to End of the Line as sweet and nostalgic; saying the records were not serious; just friends putting  music together.

TV Show: Talking Dead discussion of the use of the song in FTWD and how the band was named. Shelter From the Storm, Chimes of Freedom, Masters of War, I Shall Be Released, Most Likely To Go Your Way (And I’ll Go Mine)

Movie: Passengers (2016) movie with Chris Pratt and Jennifer Lawrence. Plays Dylan’s Bootleg version of Like a Rolling Stone 7-8 mins in.

This preview does not include the Dylan song. This depicts the exact sequence in the movie where Pratt’s character, is fresh out of the shower, getting dressed while listening to Bob Dylan.

TV Show: TMZ discussion about child stars and their talent. Mentions Jakob as a singer, but Bob Dylan can’t sing!

TV Show: Channel 5 news in DC did a segment on Dylan’s diss of people taking photos during his performance. Filled with cheesy jokes and shameful negation of an extreme talent.

“We learn, as the movie begins, that it is “based on an absurd but true story,” and Budreau keeps the bones of that story intact, although he fools around with the flesh—reducing the number of hostages, and stuffing the film with as much Bob Dylan as possible. At one point, a policeman enters the bank and gets shot in the hand by Kaj, who sits him down and orders him to sing along to Dylan’s Tonight I’ll Be Staying Here with You”on the radio. “What kind of cop doesn’t like Dylan? What kind of person doesn’t like Dylan?” Kaj asks. In real life, although a cop was indeed compelled to sing, he was allowed to pick his own tune. He chose Elvis’s Lonesome Cowboy. Talk about absurd.”

TV Show: Picture of Bob in an episode of Mom on CBS.

TV Show, Commercial: Western Governors University from Utah commercial seen in South Carolina and Chicago 5/7/19. Cover of  Dylan’s The Times They Are A-Changin‘.

TV Show: Watch What Happens Live with Andy Cohen interview with Juliette Lewis. She describes her fan struck experience with Dylan in an elevator. What happened when Bob Dylan recognized her in an elevator in NYC? She said “You’re Bob Dylan” and he said, “You’re Juliette Lewis.” “He knew my name and when I got out of the elevator I cried.” ~19min in.

“M.I.A. talked about Bob Dylan and about her whole idea that pop music can be a force for cultural change. She also talked about the idea of reconciling the versions of her that grew up in Sri Lanka and in the UK, as well as the pop-star version of herself. ”

Talking about her music as conflict. Listening to Bob Dylan in her documentary and how music can be political. Will be going to see Matangi/Maya/MIA, Oct. 5, 2018. Just back from viewing. Mozambique plays in the background in 2001 when M.I.A. travels to Sri Lanka to film her family’s reaction to the war.

TV Show: The Tonight Show with Jimmy Fallon interview with Kevin Hart about Jerry Seinfeld. Jimmy says to Kevin that his impression of Jerry is more like Bob Dylan.

“The film is already hilarious and emotional wrenching even before Chapter Two, about 8-year-old Dylan (Kya Kruse), sets out on a twisty-turny road that looks at the close relationship between her and her loving grandfather Irwin (Mandy Patinkin). The young girl’s first name figures prominently in the story as does the music of late-’90s Bob Dylan. And aspects of Chapter Two have direct correlations to Chapter One.”

Doc “somebody needs to tell Miss Kaya to play some Jimmy Hendrix or Bob Dylan or Hank Williams, Jr.” about 3min in.

Movie: Song to Song (2017) with Patti Smith. Dylan’s Rollin’ and Tumblin’ plays in first half hour.

Movie: Bowie: The Man Who Changed the World. Netflix Documentary.

Contains footage of interviews. In one interview, Bowie mentions he has 10 songs to choose from but Dylan has like a hundred!

Lots of Dylan footage from the 60s. Documents Dylan’s influence on music early in the movie. Susan Sarandon reads passages from Suzy Rotolo’s biography throughout the movie.

Movie, TV Show: I Am Not Your Negro. Documentary of James Baldwin’s perspective on race. Amazing. Dylan sings Only A Pawn In Their Game from Don’t Look Back at min 38. 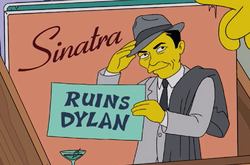 Riding out to Bear Mountain talking about music’s greatest mystery. Dylan’s motorcycle accident! A new level of fame he disappeared to recover, or did he? There are no records of the accident.  Old Dylan song playing in the background. Honey, Come Home to Me? I can’t find this song anywhere!

Manny on a double date with Luke. In middle of conversation says “If Bob Dylan was in it [a singing competition], he’d be voted out in the first round.”

“Joyce Carol Oates dedicated “Where Are You Going, Where Have You Been?” to Bob Dylan, and she has claimed that the story was influenced by Dylan’s haunting song It’s All Over Now, Baby Blue.” from SparkNotes

“Vietnam was a sideshow in 1962, under the broader foreboding of the Cold War, when Bob Dylan wrote A Hard Rain’s A-Gonna Fall, his chilling prophecy at the start of this album and the film.” See earlier post WTF podcast with Marc Maron.

TV Show: Jimmy Fallon Talks About Seeing Bob Dylan in Concert at Capitol Theater. I saw one of those shows!!

TV Show: The Voice top 12 performances, Make you Feel My Love, by Adele??

TV Show: Late Night with Seth Meyers — Scarlett Johansson on being in a Dylan music video…

TV Show: The Voice UK and US Dylan Covers.

TV Show: Life in Pieces. plays Dylan Shelter From the Storm at end of show.

TV Show: Fresh off the Boat — Miracle on Dead Street. For Halloween kid wants to go as the Traveling Wilbury’s Bob Dylan, Tom Petty…Actually dresses like Tom Petty and has 4 pics of the others attached to his shoulders.

TV Show: The Tonight Show with Jimmy Fallon. Miley Cyrus does Dylan’s Baby I’m in the Mood For You.

TV Show: Soundbreaking. PBS special on music history. Includes “the story of Bob Dylan’s recording of Like a Rolling Stone.”

TV Show: Simpsons episode, Gal of Constant Sorrow (2016). Dylan-like character pops up from the floor and says, “Oh, this place is dirtier than the tunnel.”

Movie: Who Is Harry Kellerman and Why Is He Saying Those Terrible Things About Me? (1971). Herb Gardner movie with Dustin Hoffman playing a Dylan-esque character.

Movie: Canadian Bacon (1995). Michael Moore movie with Alan Alda’s character quoting Blowin’ in the Wind lyrics as if they were his!